There was a time in the classical music community, and even outside of it, that most people associated the word “orchestra” with the city of Philadelphia. The city’s unique “Philadelphia sound” was the thing that legends were made of and, during the peak of its popularity in the city and internationally, the orchestra was prone to going on world tours. The Philadelphia Orchestra, under the direction of Eugene Ormandy, recorded best-selling classical music albums that were a hit throughout the United States and the world.

Then, the early part of the present decade, something nearly unthinkable happened: The Philadelphia Orchestra announced that it could no longer ignore the weight of its financial obligations and its debts, and it filed for Chapter 11 bankruptcy protection in the United States. Of course, legendary conductor Eugene Ormandy had long departed by that time, and the world of orchestras internationally was changing amid transitioning tastes and tighter arts budgets.

A Dilemma Resolved: How the Orchestra Plans to Emerge in 2013

As one of the world’s greatest orchestras sought to overcome its debt burden and return to profitability, it undertook a number of changes that took the local Philadelphia community by surprise. First and foremost, it ended its strong partnership with the Philly POPS, with which it had long shared revenues and a performance space in the form of Philadelphia’s Verizon Hall. The POPS had long been accused of dragging down the overall finances of the Philadelphia Orchestra, and this was viewed as an abrupt but necessary step toward a brighter future.

The orchestra next pursued a slight raise in ticket prices while freezing compensation levels for its performance staff and others within the organization. Perhaps best of all, the organization began seeking new ways of entertaining guests with an approach that combined the traditional orchestra experience with 21st century visuals.

The Audio-Video Orchestra and the Philadelphia Comeback

Over the course of 2012, bankruptcy proceedings proceeded in court as the Philadelphia Orchestra pursued a packed and popular schedule. The bankruptcy filing itself rallied both local and national forces around the organization, and its new approach to concerts brought in new fans of all ages. The orchestra began mixing its unique “Philadelphia sound” with visual displays on large LCD screens that served to reinvigorate the orchestra’s appeal.

By the end of 2012, the Philadelphia Orchestra’s annual New Years Eve concert and celebration was a sold out affair, with a packed house. Yannick Nézet-Séguin, who led the program, spoke of a bright future ahead for the orchestra as it regains fiscal solvency and pursues a new, engaging format that may well see the Philadelphia Orchestra regain its status as an international sensation and must-have orchestra experience as it moves forward. 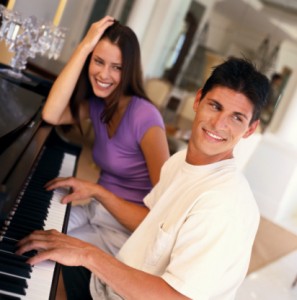 Music instructors have always known, educators have known for a few years and researchers are now proving that children who learn how to play the piano benefit greatly. Those who play well into adulthood continue to reap the benefits ranging from agility in the hands to a greater ability to focus. Adults who learn to play the piano in later years also benefit. Several mental and social issues can be tempered by playing the piano through adulthood.

Physically, playing the piano may not seem very demanding, but with time the dexterity gained through daily practice can make other tasks much easier. Many occupations require excellent fine motor skills and these skills are honed to perfection when playing the piano on as regular basis. Eye hand coordination is also enhanced by piano playing. Proper posture is easier to maintain at a desk job when the person has practiced at a piano, with feet on the floor, shoulders back and head up.

Playing  piano can change a person’s habits and tendencies. Learning to play piano music well takes a great deal of time and effort. Dedication is required. No one will learn to play overnight. It may be weeks before a new student plays a recognizable piece. Self-discipline will grow as more difficult pieces require an extra effort to play them correctly. This dedication and discipline can easily be transferred to other tasks, education and careers.

Mentally, piano playing bridges gaps that can be difficult to overcome. Scientific research has proven that learning to play the piano increases cognitive activity by connecting portions of the brain in ways that are different from almost every other activity. This often leads to piano players doing very well in mathematics, science and engineering. Children who play the piano generally score higher on development tests than their peers in all areas. It also helps strengthen the mind’s ability to focus. In an age where multitasking is expected, music requires an intense focus. Regularly practicing will increase how long the mind can stay focused on a task, a trait useful in numerous applications.

For adults, playing the piano can be a way to relieve loneliness, a way to release stress or frustration and even a way to reduce anxiety. Making music is a great outlet for emotions. Taking time to play a piece or two on a particularly stressful day can help refocus the mind and relieve the tension associated with stress.